Where is Broke Fordwich?

Less than two hours from Sydney and 90 minutes from Newcastle, the Broke Fordwich area is in the southwest corner of the mid Hunter Valley. The Hunter Valley is quite spread out so it is important to have transport of some kind. There is a small airport in Cessnock for light aircraft only. The closest commercial airports are Newcastle (1 hour) and Sydney (2 hours). Hire cars can be picked up from both airports or in the Hunter itself. There are companies that run transfers from both the airports.

If driving from Sydney then there are two routes. One is via the M1 freeway and Cessnock, the other has winding roads and stunning scenery and is quicker so we suggest that you travel at least one way by the scenic route through Wollombi along Tourist Drive 33.

Travelling From Sydney Via M1 Freeway
Join the M1 Freeway at Wahroonga and continue on past the Vineyards/Cessnock exit. Follow the signs to the Hunter Expressway M15, and follow this to its end where it joins the New England Highway. This is easy, freeway driving all the way. Once on the New England Highway, take the left turn at Hermitage Road into Pokolbin. Follow this to the end, a Tee junction with Broke Road. At this intersection turn right and you will soon be in Broke Fordwich – Broke village is at the centre, around 15km from the corner.
Travelling From Sydney Via Wollombi
Join the M1 Freeway at Wahroonga and take the exit at Calga and Peats Ridge (Tourist Drive 33 first exit after Mt White). Follow the signs for Wollombi. Travel along the old Pacific Highway for approx 15 kms and then turn left at Peats Ridge following signposts to Wollombi and Singleton. The road follows the Old Convict Trail from Bucketty and winds through the valley, past Murrays Run and Laguna before arriving at Wollombi. Continue straight ahead at the Wollombi Tavern. Continue along the Wollombi road for a further 30 kms until you reach Broke.
Travelling From Western Sydney, Via Putty Road
Follow the Putty Road from Windsor north to Milbrodale then turn right onto Milbrodale Road towards Broke. Travel approximately 13 kms along Milbrodale Road until you reach Broke at the end of Milbrodale Road.
Travelling From Newcastle or North Coast
From Newcastle or the North Coast, head towards Singleton and turn left onto the Golden Highway just after Belford. Follow this road to a tee intersection at Putty Road and turn left. One kilometer further on, turn left again into Broke Road and head south a further 15 kms to Broke.
Travelling From New England Highway
Southbound on the New England Highway, turn off at Singleton and follow the main street (John St) south. Go straight through the town and head out on the Putty Road, signposted to Windsor. Watch for the left turn to Broke about five minutes south of Singleton. 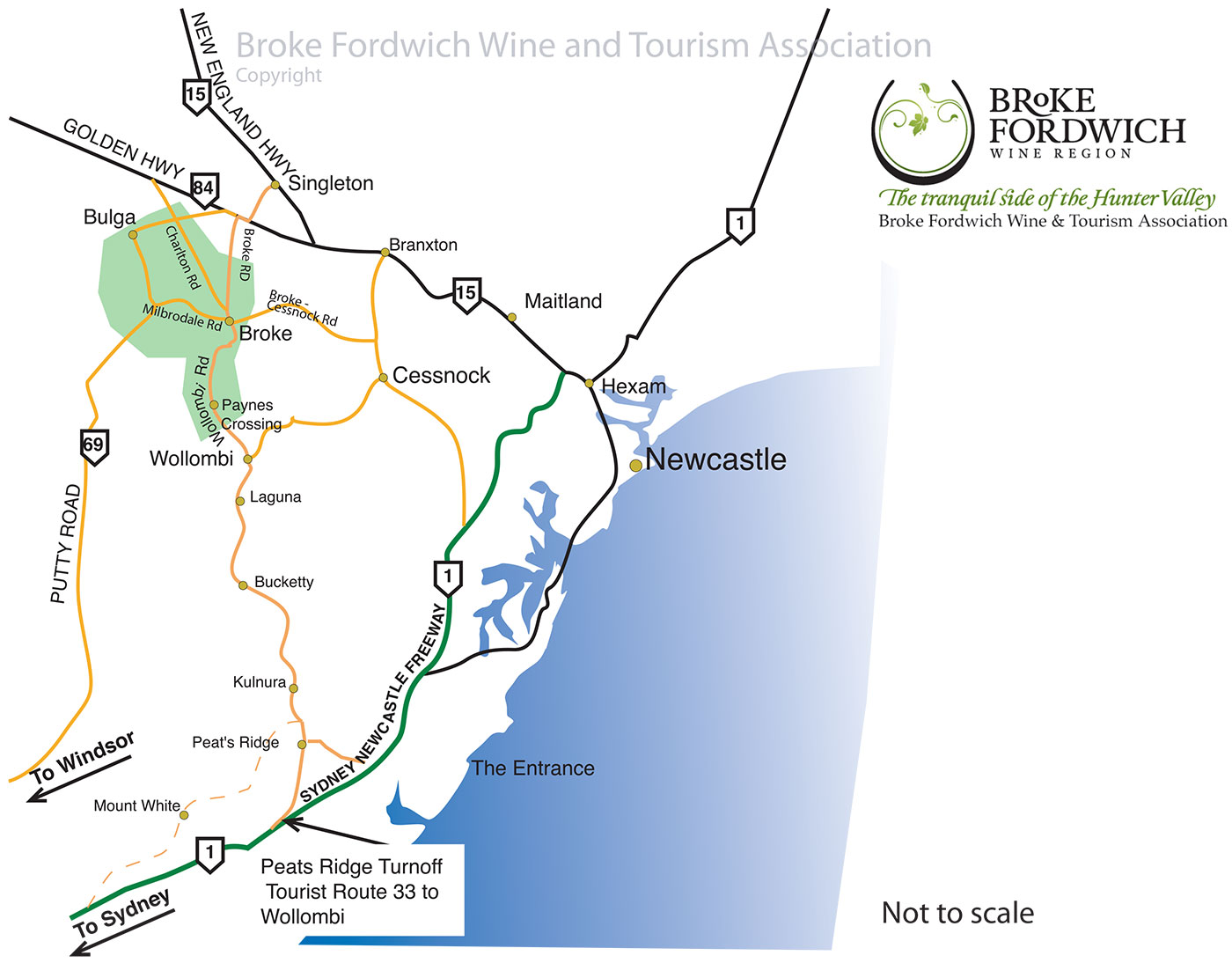